skip to main | skip to sidebar

Well, I finally got around to getting some paint on one of my 9 Hydras and I still need to put some attention to the hull-mounted heavy flamer.  The color scheme is my simple ash waste camoflage paint job. Prime the parts black, drybrush the whole model with Codex Grey, followed by drybrushing in irregular lines with Fortress Grey. 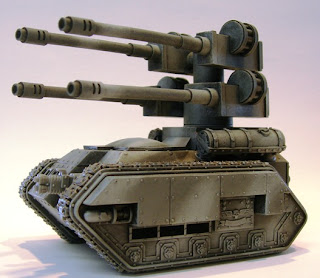 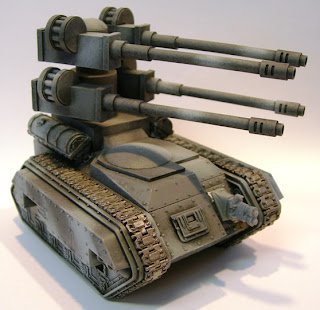 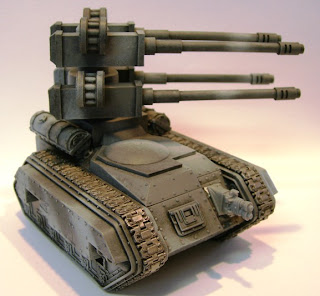 There are still a few details to be painted on the model but when I was originally working on my Armoured Company (back when you could take 6 Russ as a single troops choice) I needed to get the army painted for a GW staff Eye of Terror game.  I assembled and painted the entire army in 3 days and didn't sleep for about 75 hrs.  The details just didn't matter but I had 3 colors!!  The organizers of the game said that you could take one Force Organization chart, points were irrelevant.  Thus my Armoured Company was born as it was the most powerful force that I could think of.  It was so large that I could only deploy 2/3 of it in a 6' long by 12" wide deployment zone.

Details on my previous post on the Hydra can be found here   http://fortbuyaki.blogspot.com/2009/12/imperial-guard-alien-invader-devastator.html

Jeezus is that thing tall! I'm guessing you don't have too many line-of-sight problems in game.

I don't have anymore line of sight problems than the next guy. Like most Guard vehicles, it can see over troops without any problem.

It is a bit on the tall side, but most players are accomodating with it.